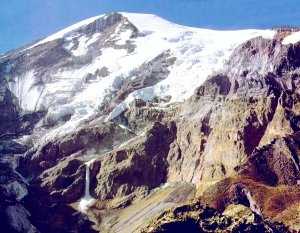 The Ahora Gorge is another area of interest for ark explorers. An 1840 earthquake caused a massive ice fall in the Ahora Gorge, which subsequently dammed up and then broke through flooding the Monastery and original village of Aghuri (Ahora) with a wall of water, ice, mud, and rocks. Ark researchers based on testimony from Ed Davis, placed the ark high in the Ahora Gorge. What was believed to be the "Davis Canyon" was investigated by helicopter in 1988 and was considered too small to contain Noah's Ark.

The imaginative minister Edward Crawford claims that unintelligible inscriptions found in the area support his theory (see www.vonbora.org) that the ark lies between the upper Parrot and Abich I Glaciers at approximately 14,000 feet. However, since the inscriptions are not readable and not supported by accredited archaeologists or scientists, his claims don't amount to much in scientific research circles.

In 1989, the Mount Ararat Research Foundation (Scott Van Dyke and company) conducted an extensive aerial photographic survey of Mount Ararat from approximately 2000 feet. They produced over 900 (9 inch by 9 inch) photos in black and white, color, and infrared. They used a Zoom 500 stereoscope that has a magnification factor of 297 times to study the photos. They could see individual boulders and sheep on the mountain. The image sample I link to above in this paragraph is a poor representation of what they actually accomplished, but I need to conserve web space. They particularly focused on the northeast side of the mountain and specifically the Ahora Gorge area. This expedition yielded some of the best imagery available of Mount Ararat.

Dick Bright, John McIntosh, and others have visual objects of interest down in the Ahora Gorge area but there have been no scientific studies of objects recently.